Well, after a bit of a Guitar-Hero induced hiatus, Alexander is back in the kitchen and better than ever! I convinced him that his adoring public needed to see him back in action - and it was also a way to get him involved in something other than annoying Sabrina and her friend. He decided to make Sloppy Joes - and I wanted a recipe that was easy to follow, and guaranteed delicious.

I've used Rachael Ray's recipe for Sloppy Joes before, and I always substitute ground beef for the turkey. The only way we like turkey around here is smothered in gravy with mashed potatoes.

So while Sabrina and her friend splashed around in the pool, Alexander learned one of the best ways to win a girls heart - (by cooking dinner!):

First, he started off by browning the meat in a large pan: 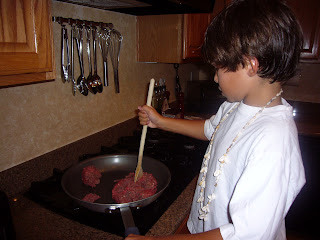 Then he added chopped onion: 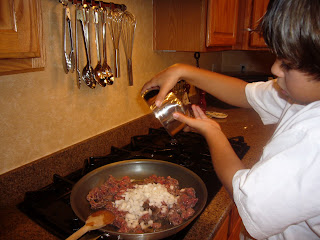 Next, he mixed up the tomato sauce, brown sugar and Worcestershire sauce, along with a sprinkle of Mrs. Dash seasoning and black pepper: 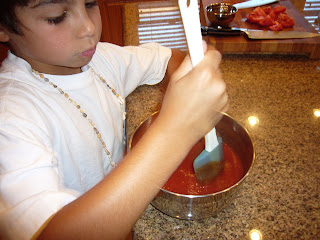 And then he poured it over the meat, and carefully blended everything together: 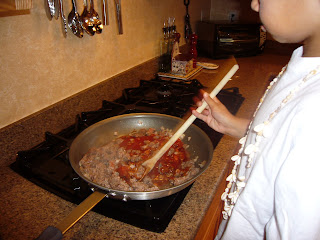 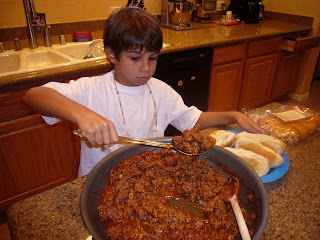 In a large saute pan, brown the ground beef. Add onion, and cook for several minutes on medium-high heat. Mix together seasoning, tomato sauce, brown sugar, Worcestershire sauce and black pepper to taste. Pour sauce over meat, blend well, and simmer for 10 minutes, until sauce is thickened and bubbling.

The verdict? Sabrina's friend went home and told her mom that Alexander made Sloppy Joes, and they DIDN'T come from a can!! And that she should learn how to make them. Got to love a childs honesty.................
Posted by Megan at 8:33 PM

Great Job Alexander! This looks so much better than the kind that I buy in a can!

I admit I love sloppy joes. Looks great. So excited about your recipe this month for BB! :)